Prisoner unrest at Boggo Road made headlines, but it was often just half the story. The officers themselves were occasionally the ones at war with the system. Drawn together as a team by the pressures of their work - and often treated as the poor relations of other uniformed services - they could display great solidarity when it came to improving their working conditions.

These industrial relation issues date as far back as 1863, when warders from the Brisbane prison presented a petition to Parliament asking for more money, so that in the case of 'debility or infirmity' they could receive medical attendance and medicine (see gallery below). Moreover, they complained of fatigue after working long shifts, often at night. Sundays were dreadful days when they could not go to the pub (lest they meet some of your recent ‘guests’), and visits to the Church often ended in sleep because in 'the hallowed precincts of a place of worship, the fatigue of the body, through the length of time on duty, and more especially at night, overpowers inclination, and shrouds it in unconquerable drowsiness'. It was signed by 14 men, describing themselves as 'the Turnkeys of Her Majesty’s Gaol, and Warders of the Lunatic Asylum, Brisbane'. 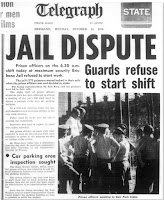 The most disruptive time at Boggo Road came from the 1970s onwards, as prisoner resistance grew, security fears heightened, and waves of change swept through prison system administration.

There were strike threats over poor security conditions in January 1974, and a strike was called in May 1974 after a senior officer was transferred after an escape attempt, leaving 28 policeman and 14 officers in charge of Boggo Road while inmates rioted and set fires. The officers returned to work and negotiations after three days.

Officers also walked out for three days in 1976 on a dispute about car-parking facilities.

In 1982 over 200 Boggo Road officers went on strike for better working conditions, resulting in 100 police and 10 non-strikers staffing the prison for just over a week. The officers who remained at work and were denounced by the strikers as 'those scabs who stayed on and stabbed us in the back'.

350 prison officers went on strike in 1988 after colleagues were assaulted during a near-riot. Police erected barricades around No.2 Division, which was subsequently staffed by 35 police officers and a Tactical Response Squad. The strikers returned to work after their demands for better security were met.

Prison officers marched on Parliament House in Brisbane during July 1990, months after the closure of No.2 Division, during a strike over staffing levels and the use of casuals, and they marched again in 1992 to protest against 'prisons for profits'.