Condemned Women of the Female Division

Not all the women held at Boggo Road were on short sentences. Some were sent there to die. The only Queensland woman ever actually hanged was Ellen Thomson in 1887. This was in the days before there was a women’s prison at Boggo Road, so she had been housed and hanged in the men’s prison. No hangings ever took place in the Female Division, but three women were held there under sentence of death. All three sentences were commuted.

In order to accommodate women being held under sentence of death, one of the ground floor cells was converted into a ‘condemned cell’ in 1904. This was done by removing the cell door from the interior of the doorway and re-affixing it onto the exterior of the doorway, allowing it to open outwards. A lockable barred door was then installed where the cell door originally was, in order to allow better observation of the prisoner. This was needed in case the condemned prisoner tried to kill or injure themselves. This adapted cell door is still in place today. 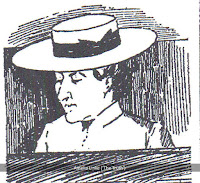 The most infamous female prisoner in early Boggo Road was Alma MacDonald. By the normal standards of the day, she should have hanged for her horrendous crime, but her death sentence was commuted. The victim was her 12-year-old stepchild, Grace MacDonald, who had been made to work in the house from dawn to dusk, sleep on the floor, eat with the dogs, received no warm clothes in winter, and was viciously beaten. She died as a result of this treatment, and a subsequent medical examination showed that she appeared to have been starved, had broken ribs and a wrist, bones were protruding from her right arm and large pieces of skin had been torn from parts of her body. Large sores showed that she had crawled around on her hands and knees, too weak to walk.

Alma and her equally-guilty husband Angus (Grace’s father) were sentenced to death in 1904, but both sentences were commuted to life imprisonment. There was a fierce backlash from the public, and it was believed that Angus, as a wealthy squatter, had used friends in high places to gain political influence. Inside Boggo Road, Alma was a model prisoner and an apparently ‘devoted Christian’ (a quality she had, unfortunately, not previously possessed). She was eventually discharged in December 1916.

There were two other women held at the prison under sentence of death. The first was a young unmarried mother called Amelia Linke. She was sentenced in April 1906 for the wilful murder of her infant son. Having smothered the baby in a paddock at Fernvale, near Ipswich, she had reportedly intended to commit suicide afterwards but lost heart. She was granted clemency on account of her ‘unsound mind’, and released in August 1908 after spending time at Goodna Mental Asylum.

In 1917 Agnes Baker became the third and last condemned woman to serve time at Boggo Road. The 16-year-old was sentenced at Townsville for shooting her father at the family cane farm near Proserpine. Her death sentence was commuted to two years hard labour, but she only served a few months and was released in December 1917.