Our day started at around six with the rattling of keys and cell locks unlocking and voices ringing out. How much activity took place depended on who the screw on the wing was. We came out of our cell carrying our shit tub and our tin mugs and stood back against the wall outside our door. Very rarely someone would not come out because they were ill then they would be locked in again. There was a screw on each level so it did not take long for us to be released. 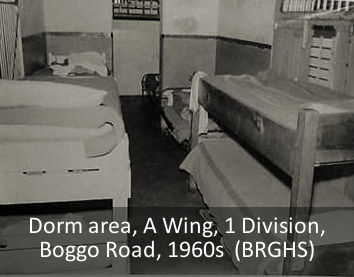 We then moved out of the wing to our yards which were locked after everyone was in them. On the way we dropped our tubs off in the sanitary yard. In the yards we did our morning rituals which included having a quick wash, a few push ups and ‘boob walking’. Yard numbers varied depending on the size of the yard but about 15-20 crims per yard at No.2. The yards in No.1 were much bigger.

We also chatted as we walked. It might be about last night’s news, or a boxing title bout (Sal Burrini beat Rocky Gatterlarie in the 13th round in a World Flyweight title defence not long after I arrived in gaol.)

One hot topic was who was back in gaol. The van bought all those convicted back to the Road the evening before and the sweepers and the bakehouse workers would spread the word. This was very important as friends of those convicted would start making arrangements to send them weed and what else they might need.

While we were walking we would pay out on the magistrate or judge who had given so and so what we thought was a ‘big serve’ (long sentence). Sometimes the air would be blue and we would also pay out on any witness we knew had lagged those who had been convicted. After about 20 minutes in the yard we would hear the screw unlock the door to our yard and slowly fall into line with the screws harassing the shit out of us to get a move on. Depending who was on would dictate the speed, especially in remand and if a crim thought he might not be back after trial. If Campbell and co. were on we would go at a speed that annoyed them.[1] Too slow and they locked you up. It was a game of cat and mouse. Once we were in line and accounted for we would leave the yards and make our way back to the cells.

Meanwhile the kitchen hands from over at No.1, usually boys, would bring over barrows (long rectangular metal boxes) that contained aluminium bowls with burgoo in them.[2] We would pick up a bowl of burgoo or the Barrow boys would hand them to us and get a gill of milk in our mugs. Once again, how much information we would get from the barrow boys and how much we sent back as we passed by depended on which officer was on.

As we entered the wing (again dependent on who was on) comments would be made on the information we received.

Other times it would be about who was back in gaol and how a message had been sent to them via the barrow boys.

Once in front of our cells we would put our burgoo on our table, walk out, put our tubs in the cell, wait for the sweeper to give us hot water in our mugs, step into cell, face out, and wait for the screw to lock us away.

Again it was all dependent who was on. If it was Michel or Molly or Dolly or Peacock or officers like them we would run around and exchange magazines and suchlike with guys nearby before being locked up. By now it was about 7am. We stayed in our cells until about 8-8:15am. Then we were unlocked again and stood outside our cell, and when told to move off did so.

I would exit the wing, turn right, pass the library and the bakehouse, cross the track and enter the workshop area. Talking was forbidden but again depending who was on decided whether we spoke to one another and how much we spoke. Most times we just meandered to the shops in line and bootshop crims would turn left and enter the bootshop. Nobby[3] would stand outside the office counting us in as we turned left into the main cage. Once inside the cage we went about our daily regime.

For some it was brew up (cup of tea.) Then gossip or plan how to get a hot pair of shoes out of the bootshop to wherever the recipient was.

Everyone was assigned a task in the bootshop and many of those tasks had quotas. Most days for me went like this. I would make a brew. If I was making hot gear, check out if the leather was available or if I had the gear I would start work on the project.

Most mornings I would wander down and have a yarn to Slim. Slim was double-escorted to his cage in the bootshop about half an hour after we arrived at work. Hanging about talking to Slim was a no-no. However like all things in gaol it depended on who was in the tower.

Also, if I was feeling good I might do some work. We had a quota to meet but it was unwritten law not to meet it.

We were sent back to the yards between 11:30am and 12pm. On the way back we were given a brief search. Again it depended who was on whether we risked taking contraband through. Some screws let us take some stuff through, others confiscated it and left it at that while others took the contraband and charged you as well.

We waited in the yards for the barrows to arrive and went through the same routine as the morning. Line up, pick up our lunch from barrow, up to our cells, locked in. Lunch was served on aluminium plates and consisted of meat and vegetables and a small loaf of bread baked by the bakehouse staff.

Same routine for the afternoon. About 1pm cells open, off to the workshop. If prisoners were coming from No.1 they were searched both ways coming and going. This was done just before entering the tunnel that connected the two gaols.

We left the shops around 4pm. Searched, into yards, walking or a bit of exercise, card playing, tennis if the yard was big enough. Roll call, pick up evening meal, and off to the cells again.

Evening lock-in could be a time of feverish activity depending who was on. Prisoners exchanged things like mags and hobby parts before being locked in for the night. If someone forgot something after being locked in then sometimes the sweeper would deliver it to them. It depended on the sweeper and also what was being transported. The time was now about 5pm.

The cells at No.2 were roughly 8’ x 7’ if I remember rightly. We had a bed, a small wooden table and a chair. The bed had a mattress which was gaol-made and filled with coconut fibre I believe. I recall seeing the fibre somewhere in No.1 Gaol.

The cell had a small half-circular barred opening area above the door and a small barred opening high on the back wall. The cells were freezing in winter and if it was wet outside they were damp as well. Then they could get very hot in summer.

Lights out was 9pm. Up to that time we used to study or make hobby items, read, or listen to the radio which blared out from a speaker hanging mid-way in the middle of the block.

We were allowed one letter a week so time was spent on doing that. People like myself exercised by running on the spot and doing sit ups and push ups. To cushion the sound I would place a blanket on the floor. Depending who was on, the time before lights out could be a little noisy.

After lights out there was silence except for the sound of officers unlocking wings when changing shifts or, depending where you were celled, the crunch of gravel under some ones feet as they patrolled the perimeter track between the cell blocks and the wall.

Occasionally an officer would meet with another officer on the track and hold a conversation. Generally not for long because the inmates would start yelling out ‘move on’, or in the worst-case scenario start banging their cell doors with mugs or stools.

Depending where a cell was situated could make a lot of difference to sleeping conditions. Being near the wing entrance could mean being woken up every time an officer entered or exited the wing. Security lighting meant some cells had more light than others. D Wing in No.2 ran parallel to the bakehouse and even though the crims in the bakehouse kept noise to a minimum, after 2:30am there was inevitably some noise.

Night time could be tough if you had a sleeping problem. People would crack up at the slightest noise.

This was the scenario when I first entered gaol. But times were changing. Certain groups were being allowed out of their cells at night to watch TV in special areas, and outside groups were coming into the gaol at night to debate against prisoners.

Weekends were different without the work. We could change yards on weekends for short periods to play tennis or chess etc. At times there were tournaments to see who the best player was. We used bats of wood that were like big table tennis bats and as there were no nets or racquets we used long benches as a net. We could also go to the library and select our own books to read.

[1] Campbell was an unpopular officer.
[2] Burgoo is a rough form of porridge.
[3] Nobby Clarke, bootshop supervisor.